VeeCAD is FREE stripboard design software that nominally runs under Windows, but many in engineering and hobbyist community no longer use Windows.  If you aren't tied into the Windows ecosystem commercially - some would talk about M$ tentacles here - there are better and free alternatives amongst the ever expanding distributions of Linux.  So how to leverage all this free software into doing something really productive with stripboard?  For the home user the Ubuntu distribution of Linux, which is in turn based on the Debian distribution (that's how open source software works folks!), is the first port of call.  For that reason we are talking about Ubuntu and in particular the latest 64bit version 20.04 here.

Assuming you already have a recent copy of Ubuntu installed proceed as follows:

Go to the Wine downloads page and follow their amazingly clear instructions.  Click on your operating system, then on the page for that operating system select the most recent stable version - we don't do bleeding edge here!  Follow the amazingly clear instructions and then type wine at a terminal window prompt.  If all went well you'll get the Usage: wine... help messages and the system will then exit back to the prompt.  The Wine install worked for me with Ubuntu 20 without any of the usual snags about dependencies and version incompatibilities.  They've quite obviously spent a very long while honing this.

Now download VeeCAD from the download page - you'll likely want to download the manual as well.  If you download it using the archive manager then there's a direct way of extracting it.  If you don't already have a Windows sub-directory in your home directory then create one.  If you are well organised you'll create another sub-directory for VeeCAD and place the Setup file there.  Now name the .exe as an argument to Wine.

The rest is super easy, but as VeeCAD is 32 bit Windows you really should install it to Program Files (x86). 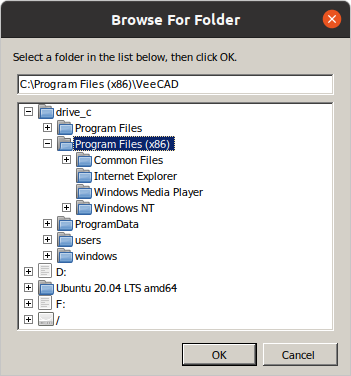 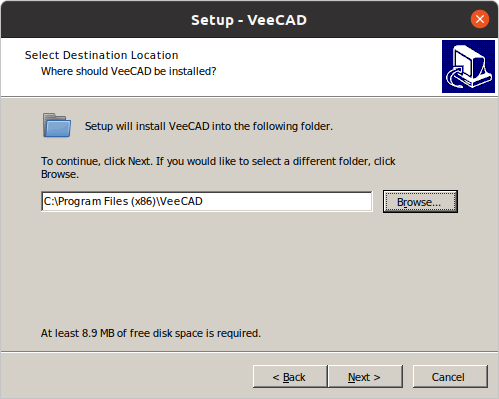 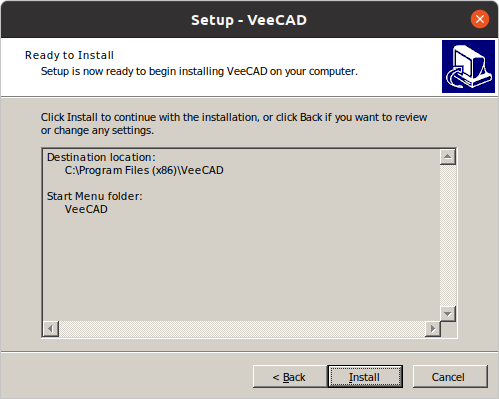 Make sure you've checked the place a desktop icon box before you hit [Install].  When install completes then just hit the run now button and presto! 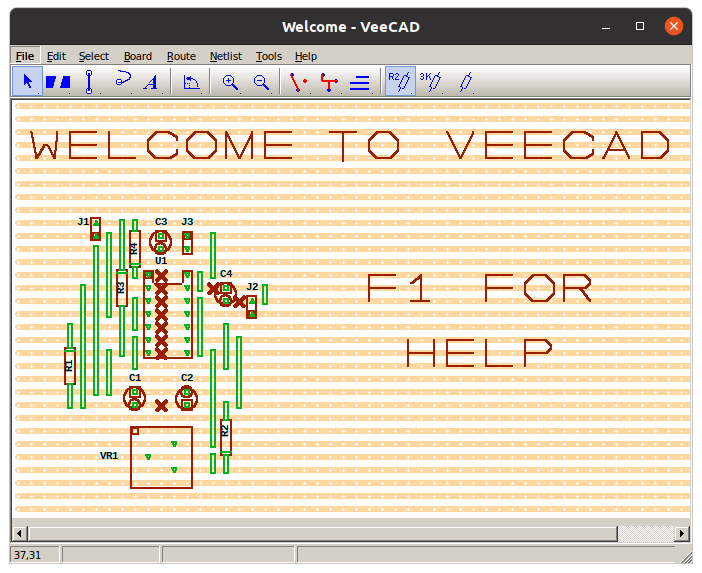 Wine stores its Windows file system in a hidden directory called .wine in your home directory, but you don't have to make these files visible to your favourite Linux file manager to manipulate them.  Simply type winefile (not winfile) at a terminal prompt and it will throw up its own Windows file-friendly file manager.  Hitting the C:\ button at the top will open a child window onto the Wine file system where you've installed to.  You can navigate to the VeeCAD.exe file and click on it to start VeeCAD.   You can also use winefile to navigate to users -> <your_name> -> Start Menu and click on VeeCAD.lnk to start VeeCAD.   It's probably a good idea to put a shortcut to winefile on your Ubuntu toolbar.  But shouldn't there be an easier way to start a program?  Well, of course there is: when you told Wine to place a Windows desktop icon it went to Linux and did the same thing, but adding in the tricks to start Wine running on the correct .exe file first.  Apart from the visual appearance of its window your installed Windows program acts very much like any Linux one.  You can right click on the new Linux VeeCAD icon and add it to favourites so that it shows up on your toolbar - nothing could be easier!

If you ever feel a need to uninstall a Windows program then simply type wine uninstaller in a Linux terminal window and an (almost) genuine Windows installer dialogue will pop up.

I subsequently found out that you are supposed to run winecfg to set up the Wine environment for VeeCAD.  I found this out from the Help in a running copy of VeeCAD - doh!  There wasn't anything to change as the defaults were already as described, but you might want to insert a VeeCAD.exe entry in the winecfg Applications dialogue for completeness - see the Help screens after you run VeeCAD for the first time.  Maybe RTFM applies here!

There are no comments to display.